In Colgate’s advertisement, we are as clueless as the poor guys, and reply in negative!

What has this to do with a textile blog?  An amazing ad of 1931 markets a toothpaste brand on a flag!

Designing a flag is not a joke. Its visualizing an ideal political order. With a flag you lead men, for a flag men live and die.

Our tri-colours in the flag are endowed with rich history. The decade of 1920’s had communal violence, so while designing one in 1930’s, INC had to be more careful. Nehru pledged “Purna Swaraj” and unfurled the flag in the midnight of 31st December, 1929 at the 44th session of INC at Lahore. This flag was made official in 1931. 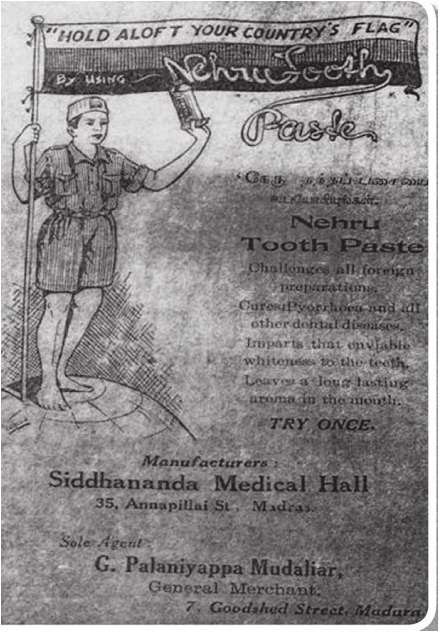 See this amazing ad of 1931 –  A lady running the “Siddhananda Medical Hall” from Madras writes a letter to Nehru – seeking favor with a testimonial about one of her products, called “Nehru tooth paste”. She sent three tubes for his personal use, and also requests a certificate from Mrs Nehru and his sisters.

The envelope of this letter carries the photo of Nehru portrayed as a boy and the flag scripted with Nehru tooth paste – the text reads “Hold aloft your country’s flag by using Nehru Tooth Paste” – A tooth paste brand from Madras brings patriotic aspirations to control the world market!

One thought on “Does your toothpaste have salt?”